Javascript must be enabled to continue!
Poulos Marios 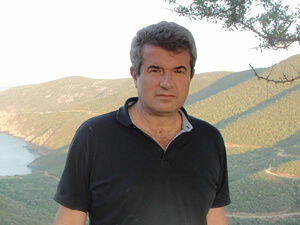 Marios Poulos was born in Corfu, Greece in 1961. He is fluent in both Greek and English. He is married with two children. He received his BSc (majoring in Physics) from the University of Athens, Greece (1986), and his PhD in Medical Informatics from the University of Piraeus (2003). Since 2003 he has been a member of staff in the Department of Archives and Library Science at the Ionian University and, in 2007, became Assistant Professor of Semantic Processing of Information at the Department of Archives and Library Science at the Ionian University. He is currently director of the laboratory of Information Technology. He is also a member of several technical committees and working groups on subjects relating to medical informatics, information science and pattern recognition systems. He is a member of the senate of the Ionian University in the academic year 2008‐2009. He is primarily interested in Medical Informatics with a particular interest in the digital processing of EEG. He is also interested in Semantic Web‐metadata, Biometrics System, Pattern Recognition, Computational Geometry, Neural Networks, Image Processing, Text Categorization, Copyright Techniques and Social Networks. He is a reviewer for the following prestigious journals: IEEE Transactions on Image Processing Journal, IEEE Transactions on Pattern Analysis and Machine Intelligence, Pattern Analysis & Applications Journal (Springer Verlang) and the BioMedical Engineering OnLine journal. He is also a member of the Expert Committee of MTSR Conference and the American Association for the Advancement of Science.
Publications: Nineteen (19) of his studies have been published in prestigious international journals, twenty (18) of his studies have been published in the proceedings of international conferences, and he has co‐written two (2) scientific books.

Digital platform for the development of educational applications focused in cultural heritage tourism with the use
of augmented reality, mixed reality and gamification